Day 9: Friendships over the years

When the word friendships come into mind it is as if I get a flashback to all the friendships that went wrong and all those who are still with me today. Friendships are somewhat weird to explain because none of my friendships are the same thus I cannot really categorize them. When I was younger and I still do this now, I would not tell my parents about the friends I have made unless I knew for sure that they were going to stick with me for a while. I took my friendships really close to heart and I would take the longest time to make sure that my friendships were worth my time. I know this seems a judgmental but it was just how I would make friends. But let me tell you now that when I make a friend they are usually there to stay and it's really amazing to have friendships that you can look back on. In order for someone to understand the world more clearly, I think we all need to have at least one of these friends to show you a different perspective in which you interpret the world.

Here are just a few but the more diverse the better. If you have at least one of these friends I can guarantee that your perspective will become more third dimensional. Sometimes we get stuck seeing the world through our lens and from the situations we have had overcome over the years. But once when you start walking in the shoes of your friends you start to understand that not everything is as one sided as we think. Their stories do not become your own, but you can learn from their stories. So I find it to be important to give everyone a chance even the people you would not think of being friends with are the ones who bring in the most perspective in your life. Just give them a chance, if you like to speak and be around with them then continue being their friend. If you find that you feel upset or annoyed to be with that person you always have the right to walk away or stop speaking to them just make sure you let them know why you do not want to be friends with them. I think they deserve the explanation at least.

I have met my very first best friend when I was around nine or ten. We were in fourth grade and she was the new girl who came from Detroit, Michigan and you know how everyone gets excited to see new students come in the middle of the school year. I felt like everyone wanted to be her friend but I was not the one to casually come up and introduce myself. I waited for my cue, if it ever came, to make myself known to her so I was left waiting. Then there was this one day where she invited some of the girls from our class to come over and I was invited. We were barely talking at that time. I remember she would mix up my name with this other short girl from class but fair enough I mispronounced her name for about a year or so, so I guess I cannot complain. Asking my mom to go over to a friend's house for the first time, I can already tell she was concerned. She is the type of mom who likes to meet the parents of the friend to make sure. Throughout my fourth and fifth grade year on Friday afternoons after school I would go over to her house. It first started with a group of girls coming over her house and then it ended up just me coming over which I did not mind. We would call our moms on the landline at school and cross our fingers that we were able to spend time together. And so we fast forward 11 years and I can still say she is my best friend. We went through the awkward teens together even though I had left for a while to go to Hawaii for my dad's work I came back. I feel we have defeated the odds honestly and I want to say this is the friendship I treasure the most because my best friend saw me when I was I just the little girl who wanted someone to laugh with to the woman I had grown and wanted to be. And I could say the same to for her. I am curious to see where the next decade will take us!

Who do you consider your best friend? 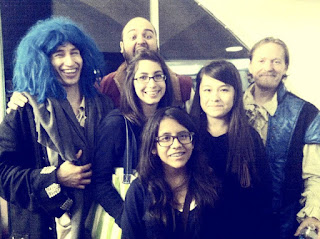