Day 2: The night with Mary Jane

In my second semester of college I was invited by my floor mate to go clubbing which for some it is not a big deal but for me who does not normally go out, it was a spur of the moment night. I did not think about it too much because I knew if I thought thoroughly of going to this club I would convince myself not to go and end spending yet another night in watching some overly dramatic Spanish movie while contemplating what were the producers thinking while recording the film. You need to watch one in order for you to understand... I am still thinking about the plot on Brujas... Anyway, I dressed out of my shorts and went with black leggings and layered with a denim shirt and sweater. I allowed my floor mate to do my makeup and just like that my floor mate along wih my other floor mate headed to the car. It was already passed midnight when we had left but the night had just begun. Roaming around the empty streets, the clubs were relatively close to one another. Just going up and down the street you would find each club blasting their own type of music with individuals all dressed distinctively. For someone who is quiet on most days, I was blurting out lyrics to the new Panic! At The Disco album with the windows rolled down. I was feeling alive that night.

During the night though there was a change, none of the clubs had caught our attention and with that my floor mate calls one of her friends, I am assuming he parties often since he did have the hook up to this party where supposedly a band was playing, and we decided to swing by his place. The moment he got in the back of the car with me, he was bringing this sketchy vibe and his over confidence kind of just wanted to make me gag. Did not help that he was already smelling like he was rolling in smoking cocaine leaves. I reminded myself that tonight was supposed to be fun and I was putting my trust in my floor mates that they would not let anything wrong happen to any of us. After collecting a few drinks from the local convenience store we headed to the party. At least it was safe to say that it was better to have purchased the drinks beforehand instead of arriving the party where you may have no clue what they put in their alcohol. Not that I am promoting drinking alcohol in any way but if you are going to do it, then be safe and smart about it.

1. I would advise to not drink with people you do not know. Same goes for drinking in small groups, stay close to the people you came to the party with and keep watch of each other in case something were to happen.
2. Have a designated driver in case you do decide to drink
3. Drink responsibly, know your limits

You can always say no to drinking. You can always say no to anything that you do not want to do and if you are being threatened or forced to do something after saying no try to seek help. Even if you have to draw attention to yourself or have to fight your way through. Sexual violence happens and it could happen to any of us at any given moment. Please do not think because you go to a party that you have to pick up a drink and join. I went to this party and I had told my friends that I was not going to drink. I came in the party without the intention of drinking and I came out with the same intention of not drinking. They understood my decision and did not force me to drink. Yeah I was awkward at the party to be the few sober people there but I cannot put myself at risk especially when I do not know my limits and that night was not the time to find out. So if you come across friends who judge you for not drinking or even friends who judge you for drinking then I think that should be enough to say about who your friends are.

We arrive at the party and it was like if I was slapped by a blunt. The place reeked of alcohol and weed, I thought I was going to get high myself just by inhaling the second hand fumes. As I stood there with my friends while they spoke to few of the people from the party, I scoped my surroundings and my exits. In the living room there was a group of guys playing video games, a tipsy small man making his way through the kitchen, and a man knocked out cold in the backyard. There was petite girls like me who were drinking like champs and all I can think about is how... I suppose anything is possible in gatherings like these. I am not trying to be prejudice at all but I felt like I had stepped into one of those cliche teen party movies and the only thing was missing is having the police come through the door and break the party up or even join in because who knows what the twenty-first century brings. By this time it was about 2 in the morning and the party was still going hard. This was a moment where I thanked myself for being an introvert and preferring a small pizza and a movie in the comfort of my own bed. I think there was even a moment of the night that this tipsy guy was hitting on me so that just about tops the party experience.

At about two thirty in the morning we leave the party and head back to the dorm. Me just being me, I apologize for my awkwardness but that I still thought the night was interesting even though it will probably be something I would not try again. To keep the night going we decided to go for breakfast at IHOP and that is how our night ended, with a night filled with Mary Jane and a stomach full of pancakes. I believe I did not get home until 4 in the morning but I can say now that I have experienced my first college party.

Please be safe in parties or gatherings where there is alcohol or drugs involved. In moments of danger, do not be hesitant to call the authorities. 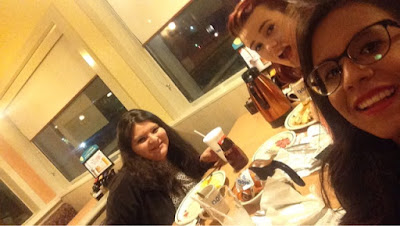