Day 14: How my love for volunteering started

When I was a junior in high school, I had started to this prestigious educational program called International Baccalaureate. I have spoken about this program previously so to some of you it should be familiar but basically this program has taught me to be a well-rounded person. In high school I was shy to join organizations and even less to be an officer to any organizations. But as a requirement to stay in the program I had to do a community service project for a year and half. So basically for a year and a half straight I had to do community service on top of the jam packed assignments and homework that had to be done. I was concerned that I was not going to be able to complete the community service aspect of the program and thus lead me to be expelled from the program. Funny how I look back it now, the one thing that worried the most was the thing that I enjoyed the most from the program. Both of my English teachers always had an eye on us and would give us resources and tools to succeed. One in particular was that they invited Mothers Against Drunk Driving (MADD) to come speak and recruit members to help out their non-profit organization promote awareness of the dangers of drunk driving and taking drugs then driving. Always curious to learn more I decided to give MADD a chance to be my community service project. Throughout that whole year and a half of serving the community, I have gone to multiple locations to give presentations, listen to presentations, go to workshops to learn more about the current issues and dangers that are happening in the community with drugs and alcohol, participated in the annual walk that MADD hosts in September, went to an Easter festival to spread the word for MADD, and go to fundraising events.

There was this one presentation in particular that I went to and my supervisor had to give her talk in Spanish. Which she was not bad at speaking Spanish but you can tell it was not her first language. Parts of the conversations I had to translate but that was not the point. The stories that you hear from the community is what gets to you. This lady had lost her loved one to a drunk driver and she was left to take care of the kids. A lot of people when you tell them not drink and drive they will just give that typical nod and yeah yeah, I know. Sometimes I just want to tell them no you do not know. You do not know until you actually sit down and listen to the actual causes and the victims that have been caught in the mess of drunk driving. Until you hear the stories coming from other people then I feel like a lot of people's attitudes are not going to change until they experience the emotions caused by one. Which is something MADD is trying to prevent from happening and which is why MADD holds a place for their victims to be able to cope with their loss and for some to come share their stories. I also remember there was this speaker who came to speak at one of our meetings and he had damaged a part of his brain from the impact of the crash he had while not wearing a seat belt. So how many stories do you need to hear to be aware of the dangers of drunk driving? Just because you do not hear about them as often, does not mean they do not happen.

I ended up becoming one of the presidents to the lead the MADD group at my school and I grew close to my supervisor who has been an absolute joy to work with. My experience with MADD has been so phenomenal to be part of that when I finished my year and half I just knew I could not just leave. I had liked the person I have become and I was not ready to just dismiss her. After high school I continued to serve my community through MADD and to this day I still find it important that drinking while intoxicated should be educated.

When I got to college I had already known that I had to do community service. Not because I had to but because I wanted to. To go to school and do community service on my free time was how I grew accustomed in high school and the habit kind of just stuck with me. I joined Mentor Tech by filling out an application online, was assigned my mentor who became such a great friend and supporter of mine that I even asked if she can continue being my mentor in which she said "of course", and I met my Protege Advisory Committee (PAC) leader who has been so kind and helpful with me this first year of college. Later that year I joined Mentor Tech Student Organization (MTSO) and found my community service family. This program was exactly what was missing from my college experience. I met many people who felt just as passionate as I did to give their time to help their community become a better place for the future. And I did not just stop there but I ran for Historian my first semester of college, did not get it but I did run which is nothing I have done before. So I pat myself on the back for that moment. After a few months has passed and I put together an event to bring high school students onto campus, that motivated me to run for officer again this time for secretary. So as of now I am the current secretary of MTSO. My PAC leader also had recommended me to apply to become a PAC leader myself because she saw qualities that just would fit nicely so I applied and I got my interview. Towards the end of the year at the Mentor Tech banquet they announced the names of the future PAC leader of 2016 - 2017 and I had made the cut.

Whenever I think about how far I have gotten I like to thank MADD for preparing me to open my heart and reach out to others. It's a bit terrifying at first to go into the unknown and not know what the next step would be but there just times that we should take chances in ourselves and see where that leads us. Now I cannot see myself not doing community service, it became a part of me and I hope that when I am older I continue to serve the community. Maybe not the same way as doing non-profit but through my profession as a psychologist.

When was the last time you have done community service? 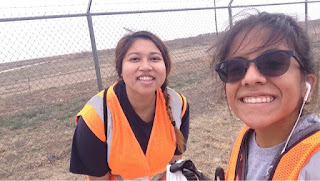