If you have not noticed yet, this recent May I went to the beauty salon and cut more than half of my hair off. I have been planning on cutting it short for a while now and especially with the intention of donating the hair to a charity that makes wigs, I just knew that I wanted to go short. Since I have been in middle school and high school, having long hair was the total trend. The majority of the girls would grow it out long and get trims within the year, and do not get me wrong I was the same way. It was like the girl code of goals to follow when it came to hair. The idea that long hair was pretty and short hair was underappreciated floated around the halls of my school. You just did not hear often of girls getting short hair cuts. As soon as I graduated from high school, I had went to the local salon to cut my hair because I could no longer stand the struggle of keeping up with hair that reached to my hip bone. I remember pulling my hair all the time especially when I would get out of bed, my hair would get stuck to my seat sometimes, my hair would brush my arm and I would swat at my arm thinking it was a bug, and washing it was just a nightmare! Without wanting to be wasteful, I decided to keep the hair that I had gotten snipped off so I can send it to an organization that would use my hair to make wigs with other strands of hair. Just like I had captioned on my revealing photo, I had fun with my long hair and I hope that someone else has the same fun as I did.

My first hair donation was in 2015 and now with my most recent cut in 2016, I decided to go shorter. I wanted to test out how I would look with short hair and if my haircut decided to go terribly wrong I would just have to remind myself that hair grows back. Since I am one blind chick without my glasses, during the cutting process I had no idea how my haircut was turning out. All I remember is my hair stylist using razor to cut a big chunk of my hair that I was donating and using a razor to make sure she was cutting the hair evenly. I was okay with the scissors but the razor just brought me to a whole level of stress because she would continue cutting with razor, that I was fearing that she was going to shave a side of my head. Now that I would not have the words to describe how I feel. Thankfully that was not the case. I have been very impressed with the turnout actually. Before she started to cut my hair I had shown her what kind of hair cut/hairstyle I was aiming for on my phone and even though I briefly showed it to her, she immediately had an idea of what she was going to do.

In all my haircuts, I have been known to sit there in silence. I am more of that person that would rather overhear other people conversations than to make small talk with someone that I was going to spend at most half an hour with. There is just something soothing about getting your hair cut though, the hair wash, the head massage, that liberating feeling you get when you cut a big portion of your hair that you have been so used to carrying the weight with you everyday. You end up feeling like a new person when you leave the salon. You know sometimes you just have to take risks when it comes to haircuts and see where the new look takes you. In the future I want to see if I have enough confidence to cut my hair even shorter and see if I can pull of that look. As of now, I am loving my short hair! So much easier to handle and care for. Since my hair is naturally straight after I wash my hair it's like a sleek piece of silk framing my face. I barely use my straightener anymore and I rather prefer not. Rather enjoy the all natural look and let my hair be free!

How short have you cut your hair before? 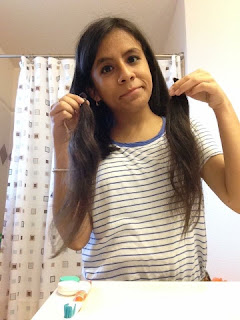 Posted by Chavelita at 9:29 PM