Now coming into realization most of the films that I have picked are musicals... Ever since I was little I was always inspired by these musicals in some way. it was just something that brought comfort, inspiration, and happiness that a lot of things could be made possible if we were to strive for them. At least that was the concept that I received when watching these films. Of course the movies may have fictional plots that may not be likely to happen, but my young mind did not take that in consideration which is why if I were to ever have a bad day or want some alone time from everyone else I know that I can watch back these movies and for a moment relive my childhood.

Annie (1982) - I remember the first time I watched this movie I was probably in third grade and my teacher would not see the ending because well she thought it was not really kid friendly. Yet that only brought more curiosity into my system which made me want to watch the movie even more. Overall, out of all the times I have watched this movie it never gets old to sing along with Annie, to root her on when she beats up the boys in the beginning of the movie, and to still get anxiety when her horrible caregiver plans to be her parents to win the cash price. I am not apologizing for the spoilers, you guys should have already seen this classic!

Fame (2009) - Before I get any lip, yes I have seen the first Fame that came out in the year 1980, but this remake had stuck with me more. I felt more movement with this movie and the soundtrack I want to say is blimming amazing... I have always envied Naturi Naughton (the girl who plays Denise in the movie) she has such a strong pair of lungs, I wish I had a voice like hers. Also Kay Panabaker (she plays Jenny in the movie) who also started off a shy girl in the movie with Denise, they both ended up pretty successful and well Jenny ended up with the gorgeous guy Marco (Asher Monroe) who also has a beautiful voice. You know what, this movie just gives me hope in general, lets leave it at that!

Flashdance (1983) - "She's a maniac, maniac on the floor! And she's dancin' like she's never danced before!" Jennifer Beals is one gorgeous woman who plays the character Alex a day time construction worker and at night she dances at a bar. The qualities of Alex in this movie is what I look up to. A confident woman who is very passionate in dancing and will actually go out there to make her dream come true to become a professional dancer. The fact that she pulls out her bra from under her sweatshirt in front of Nick (Michael Nouri) in one of their first conversations, talk about no hoots being given in that scene! And of course her friendship with her dog.

Hairspray (2007) - Can we all just take a moment to say how John Travolta (Edna in the movie) was able to stay in character throughout the whole movie without feeling weird during the rather intimate scenes with Wilbur (Christopher Walken) and still be one of the coolest moms? I still remember when I saw the trailer of the movie, I was instantly convinced that I had to go see this. To the point that even when I went to go see it I had this massive headache but I still kept my eyes planted on the screen. I actually have this movie on my i-Pod that shows how much love I have for this movie. This is a movie I can see multiple times and still fan-girl with Tracy (Nikki Blonsky) over Link (Zac Efron) and feel all mighty whenever Queen Latifah sang and gathered people to stop segregation or whenever she was on the screen. 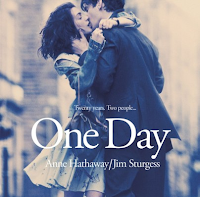 One Day (2011) - Regardless of what I have been told, this has been the top of my favorite romantic comedies. So yeah maybe Dexter (Jim Sturgess) was... rude (trying to keep it PG here) to Emma (Anne Hathaway), but there was already a part of me that knew they were meant to be together even if it took many years of reuniting on the same day to realize that. The relationship between them was very flawed which is what I loved and no where did I have the urge to cringe of how cheesy the lovey dovey parts were. This movie had kept me at the edge of my seat and I was mesmerized and a bit jealous of how Anne was able to pull off the many wigs she wore in this movie. She even had a wonderful accent... And Steve Sturgess just mmmm... Okay, I am done.

Princess Diaries (2001) - It's not because my dad calls this movie Princess Diarrea (diarrhea in Spanish) which just thinking about it made me just giggle but I actually find this movie to be witty, the right amount of girly attitude that shows that even the awkward girls can kick butt, and even though I grew up with this movie, I can still relate to this movie. When I was younger I was actually embarrassed for liking this movie because it was just one of those Disney movies made for little girls which okay I was a little girl the first time I saw it. Can we just say I had too much pride at the time? Now I don't really care what people think about me liking this movie. Well anyway, Mia (Anne Hathaway) tries to find where she fits in on top of finding out that her grandmother Clarisse (Julie Andrews) is the queen of Genovia which makes her the princess of Genovia. Just give me some popcorn and I will be content to rewatch this movie.

The Heat (2013) - Not sure which character I loved more, Detective Shannon (Melissa McCarthy) or Special Agent Sarah (Sandra Bullock) because both characters shared the spotlight. None of them shadowed one another and who ever had the idea of putting these two actresses together I just want to give you a high five. This movie forever had me laughing and yeah there was deep moments but they were good deep moments. I really enjoyed the balance of this movie and how much the characters of this movie developed with one another. I wouldn't mind watching this movie again, I probably end up laughing hysterically like the first time because there is never too much of Melissa McCarthy.

Identity Thief (2013) - Yeah you guessed it, I just can't have enough of my all time favorite actress Melissa McCarthy, I believe this was the first movie that introduced me into Melissa McCarthy which I will forever thank the movie producers for giving me the opportunity to meet this hilarious, weird, charismatic lady. I still remember the part where Diana (Melissa McCarthy) was riding in the car with Sandy (Jason Bateman) on the way to turn Diana in for stealing his identity and while she attempts to make a run from it, Diana within the first five seconds is already out of breath. Only thing Sandy had to do was walk a few steps and he had caught up with Diana. There is plenty of other hilarious moments but I'll save the blabber for another day.

What are some of your favorite movies?