Is this Isabel? No she disappeared for almost two months... Yeah so turns out that writing every week was a lot harder to do especially when you are a college student who wants to get the right amount of sleep, get good grades, and still be socially involved on campus but obviously I was not thinking clearly. So as a way to forgive for my absence I will let you in all the deets that have been happening in the past two months.

I joined a student organization that I actually take a part of so for those who say that I stay in my room too often well guess what, I'm barely in my room anymore. Joining Mentor Tech Student Organization has probably been the greatest mistakes I have made. Wait mistake? Yes a mistake... You will probably shake your heads at me. Well first of all I was already part of the Mentor Tech program at my university which what they do before anything is that you have to apply but after that you set up your own profile that includes your name all the way to the interests you enjoy to do on your free time. Then after setting up your profile the people in charge of the program will match you with a mentor who shares the same qualities as you. After all the waiting and matching, you are then assigned your mentor and they basically help you out during college which for me I thought was such a wonderful idea especially since I am known to grow really anxious in new settings and where I am not familiar with about 99% of the people here. Coming back to why joining was a mistake is that I was invited to a meeting which I thought it was for the Mentor Tech program but it turns out that what I signed up and paid membership for was for the MENTOR TECH STUDENT ORGANIZATION, now don't ask me why that did not click to me at the time that the names were different but to me I thought I had already joined this organization and that the meetings were mandatory. But nope... Yet this was the greatest mistake I have made because now I do community service just like I would do in high school yet they're better community service projects. For this semester on Fridays I have actually been mentoring high school students at a local high school here and my goodness guys I really love my Fridays because of this. Adopt-A-Class (that's what the program is called) has taught me so much, opened my mind to so many new things, and I am starting to understand more. I will take you on a little history trip because I think it will help you understand why I love teaching my students. Okay so right now, here in Lubbock, Texas, the school district first of all is different from my hometown. In 1979, the Lubbock Independent School District was desegregated. Let that sink in, because even though 1979 was 36 years ago that is still recent for history. And so when you cross I-37 here you can actually see the separation distinctively and I remember for the first time going to the high school, I couldn't stop feeling so ignorant for not realizing that just because a piece of paper was signed to eliminate segregation that doesn't mean that segregation no longer exists. Although the issues may not be seen explicitly, they are there. On that first Friday I can also recall telling my roommate about the segregation and she had no clue what I was talking about or that there was like this invisible line of separation still visible. Just seeing this though kind of made me love Lubbock a little bit more because this is different from anything I have seen and you're probably looking at me like I have lost my marbles, but now I get to see how two cultures can live true to themselves in the same city and that I get to be part of that culture mixture.

Did someone ask about boys? I have no idea how to begin this story. Alright so on Tuesdays I finish class at 12:20 for the day, which is why I love Tuesdays, and so usually I study whenever I can because exams here pop up like weasels and I like to be prepared. So normally the dorm is quiet because most of the people on my floor or either in class or still sleeping but then the CA that lives on the hall adjacent to mine starts knocking on our doors. As I peek my head to see who it was, the CA gives her long schpeel that my Texas Tech was holding A Tunnel of Oppression. In other words, what they did was that they decorated the ballroom like a tunnel where it was dark but enough light to give focal light to the skits that were hold in different sections of the room. I do not know if I told you already but I am really oblivious when someone likes me or find interest in me, you can probably give out big hints to me and I will still not catch on. Anyway after the skits we had to debrief and discuss what we just saw. As I was leaving, barely reaching to the door this tall guy turns around and said his name, complimented me by saying I was pretty, and asked me for my number (in which I gave to him). Then he said he was going to text me later. I kid you not, I couldn't stop laughing that day because I was having one of those moments like in the movie, Beyond the Lights, where Kaz tells Noni that he sees her, like this guy saw me. Not because of my height, but because I was pretty and that boosted my self-esteem and confidence immensely for the whole entire week. I am normally the girl that guys get to know me but only want to remain friends with. Even though our friendship remained short, I will still remember that moment. If the guy finds my blog and reads this, I want to tell you thank you, you definitely know how to make a girl's week.

In the month of October, I want to say that my roommate and I have gotten a lot closer than we were in the beginning of the semester. A part of me thinks it was because this is her birthday month and we have been relying more on each other. Okay, October 21st it was my roommate's birthday and since she was not able to drive back to her hometown I thought why not spend it together, doing the things that she enjoys doing which is doing crafts? After my Statistics class we left to go to different stores, first we went to Plato's Closest. Keep in mind that this is my first time so I was pretty curious to see what I could find. Just as I was getting in line to purchase the two shirts and necklace, a little boy around the age of five asks me, "Are you a kid or a grown up?". In which I thought, where in the fly did this kid get this question and right after that I wonder, well what exactly am I? I am too old to be doing childish things but I also don't feel like a grown up because I do not even know how to file my taxes or understand the whole concept of the stock market. Then he asks me again probably knowing that I was secretly trying to pretend to not hear him, "Are you a kid or a grown up?" Then I finally answered, "Well I am not a kid but I am not an adult either..." and I am just really grateful that his mom was next to me because she intervened and I was able to escape the kid before he started to interrogate me. I thought that was a great way to start the birthday adventure. Afterwards we went to Goodwill to see if we can score a few gems that people no longer wanted. Punching in the direction of the nearest Goodwill we had no idea what we were awaiting for. As we arrive the parking was gated and when I mean parking I want to say it was more like a almost solid with a bit of pot holes of compressed dirt. I looked at my roommate and we kind of just sat there hesitantly in the car debating whether we should leave or overcome our fears and go in. Swallowing that fear, we got out of the car and started heading into the entrance. I will not lie, I thought I was going to get mugged but I was also excited to be stepping out of my comfort zone which motivated me to move quickly to the door. Staying close to my roommate, we searched for room decorations. I left with nothing but my roommate picked out a few frames and a mason jar so as my roommate was paying the lady in front of us was carrying a rug the size of her. Watching her struggle, I decided the least I could do was open the door for her. While she was thanking me for helping her, she comes closer to me and says, "I asked the guy to help me but he said no. What a bitch." with a puzzled look on my face wondering if I heard correctly I nervously started laughing and in which I reply, "WOMAN POWER!" out of all the things I could of said I had to say woman power... This is why guys I shouldn't be placed in these kinds of situations. Though this day ended up being amazing because not only was I introduced to my roommate's other friends but for that day I actually felt a bit more grown up than other days. I was able to make my own decisions, say my own thoughts, and experienced a bit more grown up related topics all without wearing any makeup. College is most likely maturing me both mentally and physically which I am feeling quite bittersweet about.

College gets me so pumped, honestly. Even though I struggle getting out of bed, I do end up having a fulfilling day filled with new experiences and yeah I do get homesick but I seriously feel like college is my path to success. Just to be able to have that reassurance and goal, motivates me to complete more with my life. Making new friends, strengthening my bonds with already made friends, seriously makes a difference in college. Feeling alone is something I experience a lot but my friends whether they know it or not fill up that empty gap and I am forever grateful to meet such lovely, hilarious, caring people. College for sure makes you or breaks you, but if you put your all I am still rooting for you. That college life is not easy, but it's possible even if it takes one sleepless night out of the week to catch up with homework, friends from your hometown, or your blog.

What have you all been up to? I missed you all! 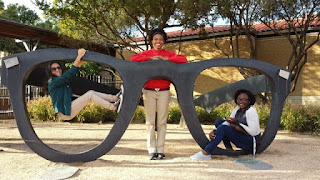 (Me visiting Buddy Holly's with my friends, but that will be another story!)